Are Germans so smart or we Dutch that dumb

juni 13, 2014
No, this has nothing to do with a possible match during the soccer worldcup. It is about open source.
Look at the German city Munich, where they started in 2005 to migrate to open source. In 2013 the project was finished successful. A migration that resulted in 14.000 of the 15.000 seats running among others Linux at the desktop and LibreOffice.
Significant investments have been made, but already now there are savings of 11 million Euro. The money that has been spent, of course will benefit the regional economy to a large extend. Smart!
There is by the way also a report that says that Munich loses money on the project, but that reports makes wrong assumptions and is - what a coincidence - written on request of Microsoft by its partner HP, that gives no underlying info. So all municipalities: do take good notice of this, for in case someone uses that manipulated report to give a negative advise on open source!

So fine, a significant use of open source does make sense. Do the people in Germany act so much smarter then in The Netherlands? Or is Munich an exception, that did not accept the special offerings?

For those municipalities that want to learn more: the Munich story will be explained on the LibreOffice-symposium (June 26 at Ede) by the project lead Peter Hofmann. With of course the focus on LibreOffice, to which the city switched in 2013.
The symposium also brings contributions from among others the municipalities of Ede and Neerijnen (the new Dutch Munich ;) ?)

Can in The Netherlands be done on a larger scale what already happens in Germany?

The LibreOffice-symposium is organised by the municipality of Ede and my company Nou&Off. It is organised especially for staff of the administrations that want a better look on starting with LibreOffice. 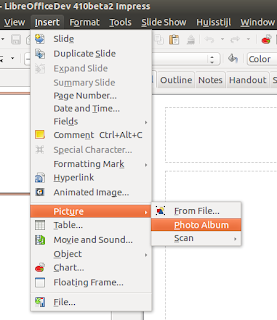 Another nice feature in LibreOffice 4.1 (as promised in my previous blog ).. Creating a slide show with a series of photo's. This works nice and smoothly In Impress , choose Insert > Picture > Photo Album . The dialog Create Photo Album opens. Note that when you open the file dialog to Add the photo's, you can select multiple pictures at once! In the dialog Create Photo Album you have choices to add more pictures per slide, fill the slide or keep ratio, set order.. Fine with that, click Insert and see on the Slide sorter what nice result you have in a hand turn! Kudoos to Gergő Mocsi for adding this lovely feature to LibreOffice!   LibreOffice 4.1 will have it's first release candidate around June 23, and the release at the end of July. See here the full schedule for the main releases and bugfix versions of LibreOffice. The beta version is already available on pre-releases page.
Meer lezen

One of the big advantages of LibreOffice has been, for a long time, that it offers the well known menu based user interface to its users. Less known, is that LibreOffice also has solutions for the group users that is quite well used to different interfaces: the Notebookbar! Over time LibreOffice worked on the concept of the Notebookbar, and that got supported by the working with Glade-designer for the user interface. With it's tabbed view, it looks as a notebook ;) The Notebookbar itself also has multiple forms: Tabbed, Contextual Single and Contextual Groups. It can easily be seen in the next 5.3 release, if experimental features are turned on. The official 5.3-release is end of January. LibreOffice offers an ideal solution for people that prefer to work with either a menu, or with a side bar, or with a more block-like interfaces! Settings Tools > Options > LibreOffice General > Advanced … check Experimental features View > Toolbar Layout > Default/
Meer lezen

oktober 05, 2018
Years and years ago I was visiting the region of Lyon - of course by bike. At one morning I entered a little village early and visited the local market to get me some nice fruit and vegs. One of the stalls was a bit strange. The man had really wide baskets, but with only a little bit of fruit in them. I could think of some boites hidden at another place for more, but wondered why that was so. So I asked the man just if he liked to show his fruits with so much space. The man friendly explained to me that is was a matter of education. For him, when you see an abundance of fruits, it may seem that it's all so easy, comes at little cost. But for the grower that was not at all the case. He summed to me all things he had to spend time and money on before he could go to market with the results of his hard work, with selling fruit. Items as keeping the paths in good state, preparing compost and covering soil with it, pruning trees, repairing the roof of the grange, buying clothes to work
Meer lezen