Last weeks Thursday, March 24, five Dutch LibreOffice hackers met for a special event: we were invited at the yearly congress of the NoiV – a Dutch governmental institute for the adoption of open standards and open source. We were there to show how developing open source works. All five of us have widely varying experience and skills. Speaking for myself, I am not really the most experienced C++ developer, far from that, but still could do useful work during the event and helping understanding features etc.
Even more: our different backgrounds definitely helped us, to have a very interesting and useful day. Not only did we some good work on some interesting and useful code: we also learned a lot of each others skills, of the work itself, and as bonus were able to explain other people at the congress the suite and our work.
So first some pictures:

(see pictures one and two from Paul Ridderhof on flickr).

Pieces of code we worked on and had a look at were
- toggle function for Notes in Writer (easy hack) but part of it turned out to be far less easy than expected..);
- precision of decimals on the import of a cvs file;
- color of footnote separator (explained my previous blog) Whyle working on it, we found out that the feature was committed to the master just four days earlier ;-) );
- more than the 12 default colours for diagrams (question on the LibreOffice users-list). Thanks to Rob, this will be possible from LibreOffice 3.4 onward! See the dev-list and this screen shot: 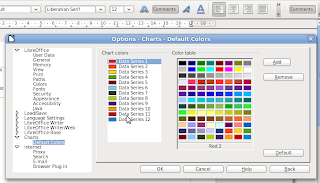 Just as the people that visited our event positive, so were we!
We decided to have another event organized somewhere the next months. And also to join T-Dose next Autumn in Eindhoven. Pls stay tuned, or read our Dutch discussion-list :-)
Gepost door Cor & OfficeBuzz op 02:49