Years and years ago I was visiting the region of Lyon - of course by bike. At one morning I entered a little village early and visited the local market to get me some nice fruit and vegs. One of the stalls was a bit strange. The man had really wide baskets, but with only a little bit of fruit in them. I could think of some boites hidden at another place for more, but wondered why that was so.

So I asked the man just if he liked to show his fruits with so much space. The man friendly explained to me that is was a matter of education. For him, when you see an abundance of fruits, it may seem that it's all so easy, comes at little cost. But for the grower that was not at all the case. He summed to me all things he had to spend time and money on before he could go to market with the results of his hard work, with selling fruit. Items as keeping the paths in good state, preparing compost and covering soil with it, pruning trees, repairing the roof of the grange, buying clothes to work in, getting help in picking, petrol and repair for the machines, and so on.

For me, the man concluded, all that are costs I have to make on the fruit. So if you see a basket filled to top with fruit, don't be misled and remember how much has to be done before it can be presented..
Happily I bought me a bunch of fresh figs. But from then on, for me a market never has been the same.
Gepost door Cor & OfficeBuzz op 07:38 1 opmerking:

At the beginning of the new year, the Tilburg University organizes the Tilburg Orientation Program (TOP) presenting all kind of interesting and cool stuff for the new students. So at August 22, a nice and sunny day, there was a huge event in a park with lots of plays and booths and music and beer. And: three people from the Dutch LibreOffice team were there! 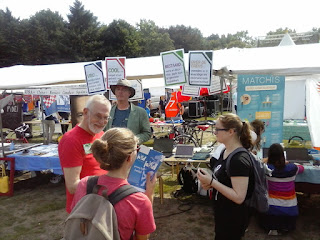 We had a nice booth and prepared both flyers and small cards. Especially the cards were handsome to reach out to people: "want a free card for free software" is a short and appealing message. Thus we handed out a six to seven hundred of the cards. Of course we had good talks too: dozens of individuals and groups wanted more information. And there are people that know and use open source. Or were just in need for a good office-suite for their new bought Mac book ;) 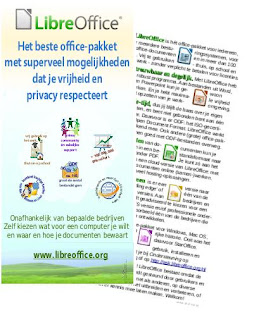 It's always interesting to see how people react. For example if you tell that Microsoft doesn't really loves students, when they offer software very cheap, but that they just want to make you very well used to it, so that they can charge high prices when you've finished your study.. And compare that to LibreOffice: free always, at school, home, office. And of course free choice for donations or paid support if desired!

Was fun to hear some of the students call the way Microsoft does this "the drugs dealer method" ;) Anyways: Pieter Kristensen, Freek de Kruijf and me had great fun with the people and the music and showing LibreOffice. To be continued next years, as far as I'm concerned.. :) Not the least since universities are an excellent place to support the importance of ODF as sustainable and durable document standard. 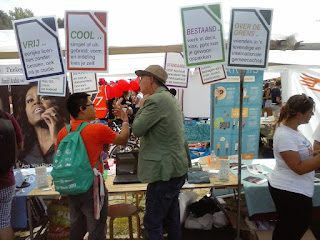 One of the big advantages of LibreOffice has been, for a long time, that it offers the well known menu based user interface to its users. Less known, is that LibreOffice also has solutions for the group users that is quite well used to different interfaces: the Notebookbar!

Over time LibreOffice worked on the concept of the Notebookbar, and that got supported by the working with Glade-designer for the user interface. With it's tabbed view, it looks as a notebook ;)

The Notebookbar itself also has multiple forms: Tabbed, Contextual Single and Contextual Groups. It can easily be seen in the next 5.3 release, if experimental features are turned on. The official 5.3-release is end of January.

LibreOffice offers an ideal solution for people that prefer to work with either a menu, or with a side bar, or with a more block-like interfaces!

It has been a bit quiet. On this blog. And apparently also at the Dutch government with regard open standards. If that would be the case at all, then now there is some very good news. In the attendance discussing the "Actieplan Open Overheid" ("Plan for action on open government") the parliament adopted a resolution to make the use of open standards mandatory. Mandatory for the countries government and the regional/local administrations. By law. This, finally, will put an end to the halfheartedly policy in this area. An excellent example is easy to spot at the parliament's website: the resolution is published in an old proprietary format..

In any case: excellent news. And thanks to MP Astrid Oosenbrug for her competent and tireless work for a saner approach for the countries ICT. And of course to all other MP's that understand the importance of this.
The resolution also asks the government to improve sharing the knowledge they have on open source software. Very useful, since there is a lot of knowledge in this area at the various services/offices. My compliments!
Gepost door Cor & OfficeBuzz op 04:01 Geen opmerkingen:

The giant from Redmond must be desperate since it has to use a controversial story from a relatively small Italian city to combat open source software, as in the mean time many larger deployments also in Italy are happy with LibreOffice and the numbers produced by Provincia di Perugia prove the opposite of the Microsoft-publication.

All this does not prevent Microsoft from using a 'study' to make false claims.
This situation looks similar to what happened with a Microsoft sponsored HP publication regarding the city of Munich, that works with Linux and LibreOffice. The HP publication 'proved' high costs in Munich coming with the open source solution. Yet the reality is that during the migration alone, 13 million was saved. That apart from the million or more license fees that ware saved every year since 2013. Savings that are partly spend to support the development of the open source software that Munich uses, and that also stimulate local/regional IT-firms.
Does these actions from Microsoft look so desperate because now also it's office-business faces serious competition?
Gepost door Cor & OfficeBuzz op 05:12 5 opmerkingen:

Looking back and forth

LibreOffice is entering the mobile and on-line space, and we'll see full open source private cloud solutions soon. Great! Still sometimes I'm forced to look back. Simply because the name "Open Office" is known by many people, based on its great history. I have to explain regularly what LibreOffice is and what makes it so much different.
To put some more weight on the latter, my colleague Barend and me worked on comparison of the features of LibreOffice and Apache OpenOffice. Read it here. Be warned: it's a nearly 60 page document. It focuses on areas as feasibility, smart use, quality and improvements, localization and more. It lists hundreds of smaller and larger improvements in LibreOffice, and only few in Apache OpenOffice.

There is a notable difference between this information and many comparisons of LibreOffice with Apache OpenOffice found in articles on the internet. Journalists often seem to lack time for a better analysis of the vast amount of features a productivity suite offers. We hope that our document does offer that comparison in a comprehensive and structured manner.
In my opinion now is the moment for all to let OpenOffice be just what it is: an important part of history. More than enough work ahead for LibreOffice, I would say - see the introduction of this article. It is my hope and wish that people will be able to focus on that and find joy and satisfaction in the development and use of LibreOffice.
Gepost door Cor & OfficeBuzz op 15:28 1 opmerking:

your most beautiful work with LibreOffice Writer

What brings more joy then publishing a guide on Document Freedom Day to help scholars making beautiful work with a free open document standard? Therefore today the Dutch Language LibreOffice-community made available the publication "Maak je mooiste werkstuk met LibreOffice Writer" ("Create your most beautiful work with LibreOffice Writer"). The guide is for scholars in the age of 11 and older.
Currently the publication is Dutch only, but will be available in other languages soon thanks to the ODF Authors-community.
There will also be a version for scholars in the age of 9-11 year.
Download here.
And read the full announcement here.
Gepost door Cor & OfficeBuzz op 09:23 Geen opmerkingen: